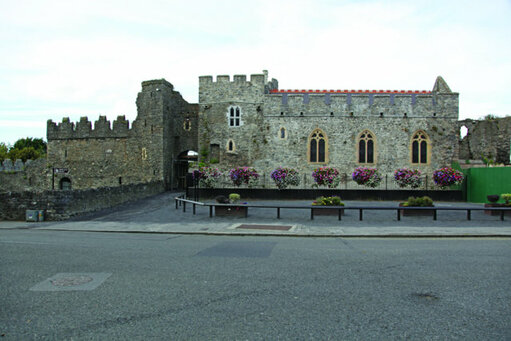 Such a rich heritage
We all know that Fingal has a really rich heritage dating back thousands of years, and that it is embedded in the wider landscape of Dublin City, Meath and Louth, all of which have a treasury of ancient tombs,settlement sites and ringforts; churches,roundtowers and castles;holy wells, watermills and windmills; the flora and fauna and amazing bio-diversity of Fingal.

The Ancient East
All of this set in an historic heartland and landscape, truly the Ancient East, with its mystical boundaries of rivers, seas and hills, every one of them woven into story, myth and legend. Springing from that physical heritage we have a treasury of ancient tales, local history and folklore; ballads and songs; poems and rhymes; music and dance; sean fhocail agus pisreoga; ancient celebration of the seasons and Christian feasts; the Wren Boys and the Mummers. And so much more.There’s actually more than 900 archaelogical monuments in Fingal.

New Fingal Heritage Centre
Swords Historical Society has operated from the Carnegie Library since 1987 as a Museum & Heritage Centre and Fingal Genealogy, under the direction of the valiant Bernadette Marks and the voluntary committee. Over the years they have met and greeted hundreds of returned emigrants and their relations who love to hear the local stories, bringing them back to their family roots.

But now we need a new Fingal Heritage Centre in Swords to bring together all those strands of Fingal’s Heritage in a coherent, modern fashion, to create multi-media presentations on all those aspects of our heritage, to promote it at home and abroad, to organise guided tours and field-trips and all the appropriate merchandising and commercial tourism activities. All those strands need to be woven together. And of course this development would be a major boost to Fingal Tourism.

1916
The Fingal Battalion of the Volunteers played a prominent role in the Easter Rising of 1916 and in all the activities of the War of Independence and the Civil War that followed.
There are copious accounts of those brave endeavours and we need to have them all collected and codified and made available to the public of Fingal, both young and old in appropriate multi-media presentations.
We should also have a designated annual celebration of all those heroes right here in Fingal, and ensure that their memory is honoured, celebrated and remembered.

Every community in Fingal, whether in townland, village or town, should work together to commemorate, preserve and celebrate the bravery and sacrifice of all the brave men and women who played any role in gaining the freedom of our country for us. We are eternally grateful to them.

Parks
The Parks Department of Fingal has rightly won acclaim over the years for its marvellous work. Citizens of Fingal are rightly proud of the great parklands on our door steps- Ardgillen and Bremore, Malahide Castle and the Talbot Botanic Gardens, Newbridge House & Farm, the Ward River Valley, Santry Demesne, Skerries Mills and Swords Castle. They are in my opinion the very best parks in the country.That should give us a major lead over other counties in terms of quality of life and developing our tourism potential.

Tidy Towns
We all appreciate very much  the constant hard work of  local committees in the Tidy Towns and Cleaner Communities in Fingal, who do so much to make us proud of our preserved and built heritage and strive for a cleaner greener environment. We congratulate all those towns and villages who won prizes and we encourage all the participants to keep their sleeves rolled up and to continue with the great work.

We can Do Better
But there is still so much more we can do. For many years I have encouraged the brilliant Tidy Towns committees, local businesses and communities to do much more to beautify our towns and villages, starting off with totally cleaning up the considerable litter still to be seen on our streets, and in our hedgerows,but moving swiftly on to a concerted campaign to paint and freshen up shopfronts, offices and residences in the winning style of Clonakilty, Clonegal,Moynalty, Kilrush, Kilkenny or Westport.

Tourism Plan
We have so much to offer in our parklands, our beaches and coastline,our lovely villages and towns,our agricultural and farming communities, our historic monuments and locations,our social, sporting and leisure facilities.In a co-ordinated plan we must promote our sailing, yachting and water sports; our heritage trails and heritage sites;our equine sports;our track and field and team games; cycling, walking, jogging and running facilities; our traditional music, dance and singing traditions; photography, outdoor art and artisan customs and crafts;our hotels, restaurants and pubs decorated without and within with style and distinction, and so much more!

Build the Working Tourism Partnership for Fingal
We need to bring together all the relevant organisations in Fingal to create an overall integrated programme for our urban and rural communities to work together to develop the real potential of fair Fingal.The Tidy Towns, the Blue and Green Flags, the Purple Flag and the wonderful new Dublin Bay Biosphere Partnership, and all the other similar sporting and tourism initiatives and organisations must work on a more comprehensive, integrated plan, to involve all the communities and businesses of the county, and use that platform to greatly increase the attraction of our tourism product here in Fingal, for ourselves and for visitors.

All-Ireland Pipe Band Championship 2016
For the first time ever the world-renowned All-Ireland Pipe Band Championship will be held in North County in 2016 and Malahide is the chosen location for the competition.This massive tourism boost will be highly significant for all our hotels, restaurants and local businesses, with over 5,000 pipe band fans expected to attend, spending at least half a million euros in the local economy. I had the privilege of working closely with the great Fingal Council team on this project and teamwork won the day. Bands from Scotland,Canada,the USA and Australia will compete against our own mighty bands including the Black Ravens from Lusk,St. Maur’s from Rush and the Laurence O’Toole from Howth.

Great Future for Fingal Tourism
We have all the expertise necessary to work hard together and bring many other similar events to our county. Fingal is a tourism market waiting to be developed, and we should begin to work now on a major forward-looking Tourism Plan together, and deliver it for Fingal.

We need a new, funded, ten-year Swords Castle restoration plan
Way back in 1995, twenty years ago, a plan was agreed for the longterm phased restoration of Swords Castle, and the objective was to have the castle fully restored and put to use for community use and to grow Fingal’s tourism business round that restored gem of our heritage. That was and still is a laudable objective.Within the first three years the Constable’s Tower was restored, but it is only recently that we have had the completion of the new roof on the castle Chapel. The Castle is still a very long way from the likes of Bunratty Castle and its famous Medieval Banquet, and the scope for tourist functions or even community use is severely limited, and that’s a real pity. I welcome the Conservation Plan for Swords Castle published by the Council in 2014, and all those minor works need to be completed. But we need a new ten-year plan and the resources necessary to compete that portion of the restoration which will establish Swords Castle as a major tourism venue once and for all.’ Build it and they’ll come,’ as they say.